2008 ended disastrously for this web-site: in early December, my mobile 'phone was stolen (barely a month after I'd got it back from being repaired, which had taken over a month); and its replacement managed to fry my antique mother-board, forcing me to replace most of my computer.

With my 'phone, I lost my address-book, thanks to Sony-Ericsson providing no support at all for back-up to Linux, so I vowed that its replacement would be Linux-friendly, come what may. I opted for Neo FreeRunner, an OpenMoko device (don't try this at home, kiddies—unless you're willing to work on improving the software a lot; it sorely needs it); and, since waiting for it to be delivered would leave me 'phoneless for most of the ten days it takes to move a 'phone number from one service provide to another, I opted to switch from expensive NetCom to a cheaper deal with One Call.

The resulting delay squeezed the first day I could use the new device to the day of my planned travel to England (I have a new niece that I just had to meet—and, of course, this gave me an excuse to catch up with friends and family). On the morning of my departure, I plugged my shiny new OpenMoko device into the USB port of my computer. I had never used this port before (in fact, I hadn't realized that 7½-year-old mother board even had one until a few days earlier) and it seems it didn't like being used – my computer died just then, possibly due to using the USB port (but hey, it may just have decided that was A Good Day to Die for random other reasons). Naturally, I didn't have enough slack, in my plans for the day, to be working out what was the matter, let alone fixing it. I stopped at work, on the way to the bus to my flight, and my colleague Alexey managed to do some useful things to my new 'phone, but it still didn't work when it came time for me to get moving (although we later discovered it just needed a re-boot); so I travelled incommunicado. Joy.

After a pleasant and refreshing holiday (the first time in several years that I've travelled by air and not gone down with a dire cold shortly afterwards), I dragged my computer to work, where our friendly sysadmins helped me by working out what was wrong: deep-fried mother-board. I then set about trying to figure out what to get as a replacement for it. Some of the laptops on offer look pretty good (which is a huge leap forward—last time I checked, none of them had key-boards big enough for my hands), and I find remarkably little difference in hardware specs (aside from weight and price) between them and ready-built PCs. Another thing both categories uniformly shared was a determination to deliver MS-Windows Vista® ready-installed. This being something I vehemently don't want, I took my colleague Rune's sensible advice and bought parts instead.

New motherboard inevitably implies new processor (64-bit AMD Quad-core Phenom® 9950, 2.6 GHz, for a merry total of 20850 bogomips); I could probably have kept my old video card but hey, why not replace it (ATI Radeon 3450 Saphire) ? Since terabyte disks now actually exist, I naturally had to have one—in fact, why not a 1.5 TB disk ? Sadly, that really does mean 1.5e12 bytes (i.e. 1½ million million bytes, formally 1.36 tebi-bytes, which might even be written 1.36 TiB), not one and a half tebi-bytes, which would be 1.5×240 = 1649267441664 or nearly 1.65e12 bytes. None the less, it's more disk than I can comprehend, which should keep me going for quite a while – at least until I've finished the my re-implementation of the primes as a python object. Chuck in two 2GB RAM cards and I still got non-trivial change out of five thousand Norwegian krone (after delivery charges and the item below).

When I came to assemble the parts inside my old box (along with my puny – and, I now find, rattly – old 30 GB disk) and try to install Debian GNU/Linux from CD (on loan from Opera's ever-helpful sysadmin team) I discovered my old CD-ROM drive was on the blink (I got random checksum errors, different each time I tried), so even that had to be replaced; which at least provided an occasion to upgrade to a DVD R/W drive. So I start 2009 with the same old box containing a wholly new set of components – and a shiny Neo OpenRunner whose software I really need to improve.

… and the USA finally elected a decent president, so there's hope yet for planet Earth. Good luck, Mr. Obama. 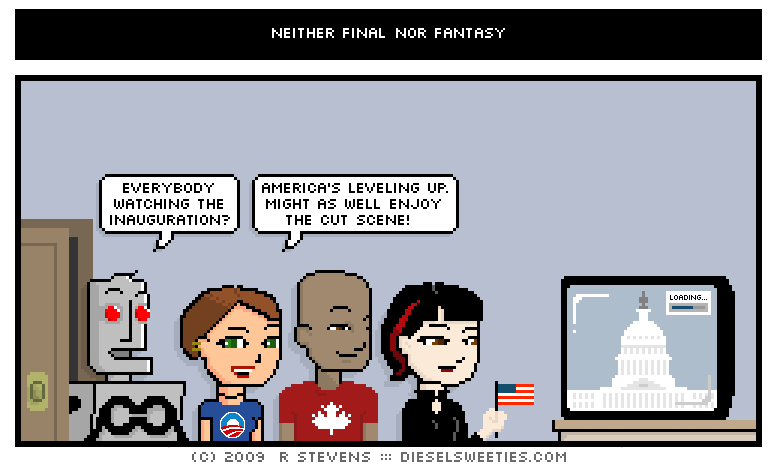